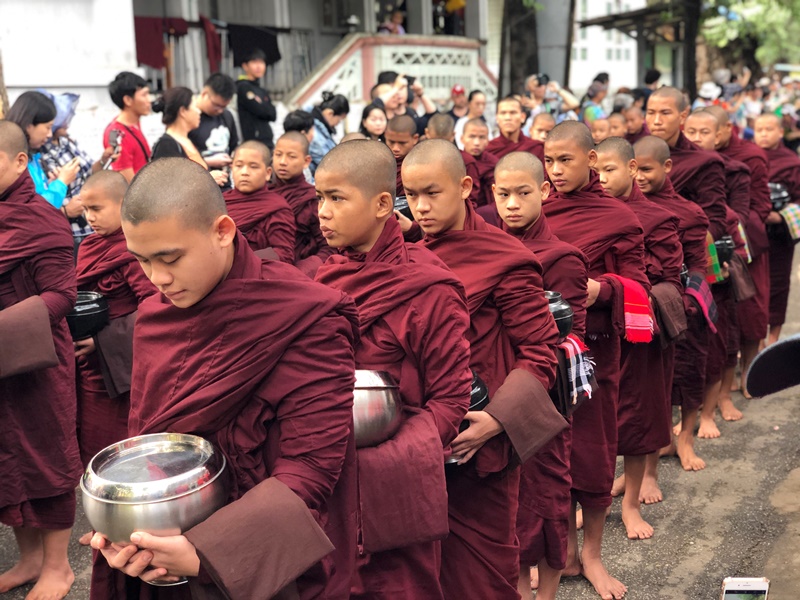 Where is the Monk’s breakfast?

The Monk’s breakfast is one of the top activities to do in Mandalay. The place is called Mahagandhayon Monastery in Amarapura city located 10km from Mandalay railway station, approximately 25 mins by car depending on the traffic.

Mahagandhayon Monastery is very close to where the U-Bein Bridge is, however to see the stunning sunset over the bridge, you have to fill other things to do in between as the Monk’s breakfast happens at 10am everyday.

A little WiKi about Mahagandhayon Monastery: it is the country’s most prominent monastic college. The monastery, known for its strict adherence to the Vinaya, the Buddhist monastic code. The monastery was first established by Agatithuka Sayadaw, a Thudhamma-affiliated monk around 1908, as a meditation monastery for forest-dwelling monks.The monastery gained further prominence under the leadership of Ashin Janakābhivaṃsa, who began living there in 1914. During the 1970s, Ne Win, the country’s leader, sought advice from Shwegyin monks at the monastery.

When is the Monk’s breakfast?

Normally I would assume breakfast happens between 6am to 8am. But in Mahagandhayon Monastery, monks have a more strict daily routine than the outside world. They serve only one meal a day which happens at 10am.

This activity in Mandalay has become extremely popular and it can get really overcrowded. To get a good spot to photograph and to give yourself a bit of time to explore the area, you need to arrive around 9am.

The monks are clearly very well practiced and diligent in their activities in the morning, working in defined teams so breakfast can be prepared at the same time for all  2000 monks in Mahagandhayon Monastery.

How to get to Mahagandhayon Monastery from Mandalay?

There are buses of course. The city can be a little mad if you don’t know the language or are familiar with the local transport.

In my last post I recommend downloading Grab APP for an easy ride in the country. It also works in other South East Asia, just like Uber. The great thing about Grab is you don’t have to try the poor pronunciation of the street name, all communications can be done via the APP. It’s really useful.

Most important with the Grab APP, you don’t feel you are ripped off being a tourist anymore as all the ride price is advised on the APP and it’s a fair price.

How to fill your day if you have Monk’s breakfast and U-Bein Bridge marked down on your list?

We travelled in a small group so we had a better option, we hired a car and a driver who spoke a little English. It was inexpensive, the whole day rate was approximately US$40 for the 4 of us to split.

We took a boat trip the next day to cross the Irrawaddy river, the boat trip to the Min Kun City was an amazing experience. Also to break the days up with enough things to do but not overpacked yourself.

Next post on: the Tour in the Inn Wa Ancient city (also known as Inwa or Ava Ancient City)