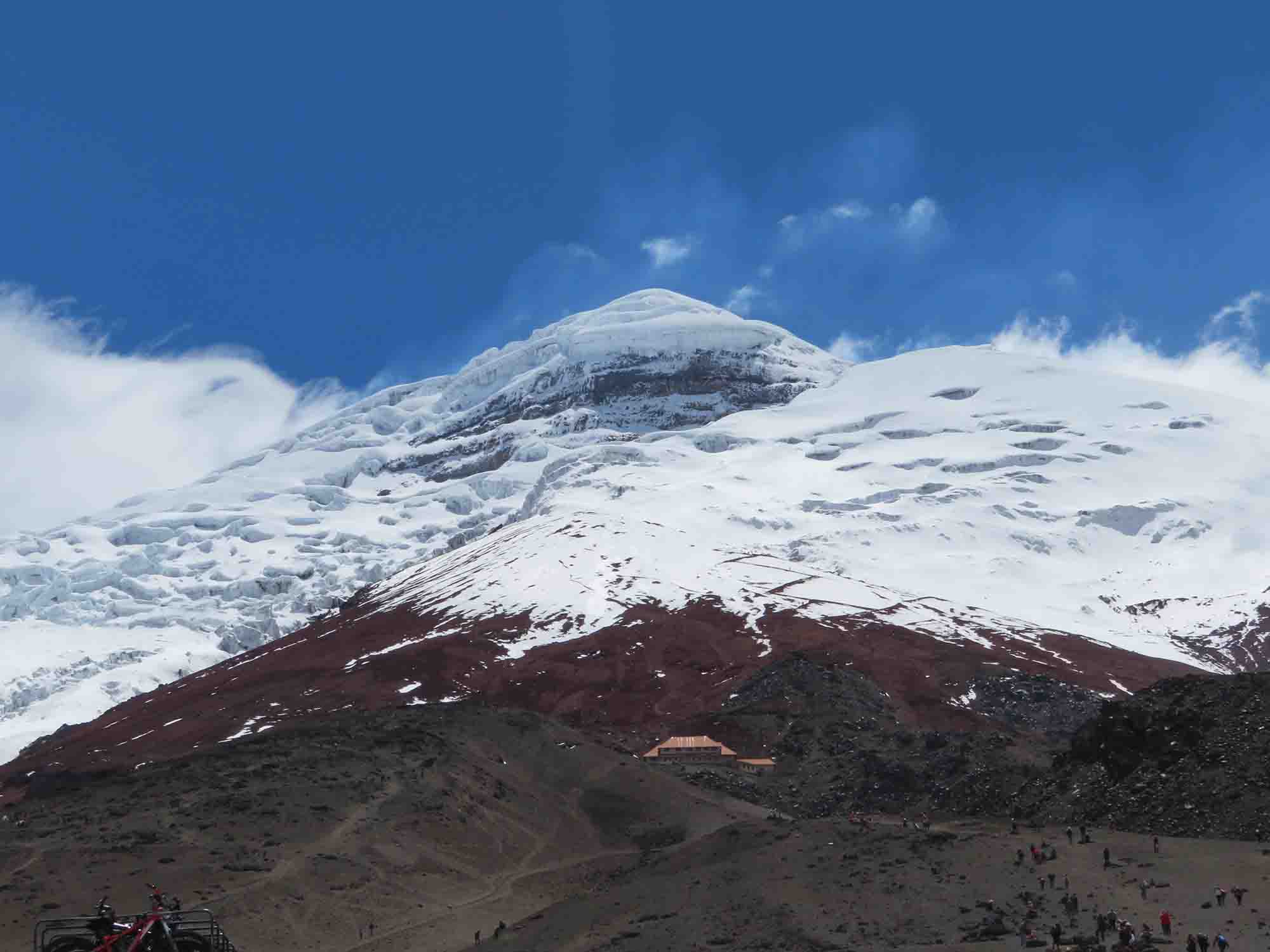 One of the Top Activities from Quito, Climbing Cotopaxi Volcano Summit

We arrived at Quito in the late afternoon.  This would be our final destination of our entire journey: A complete bus journey to the middle of the world, Cajamarca to Quito.  We had only one and a half days to explore this city, so we joined a day tour to Cotopaxi Volcano and a double-decker bus to wander around Quito.

We lodged in 2 different hotels as the first one was an extremely historical building (over 300 years old), essentially everything internally (the bathroom) was a bit hazardous, despite the location being brilliant.  I had to cancel the second night and find another place to stay.  Luckily I managed to find another nice lodging place on our budget that was a 3 minutes walk from the previous one.  It was a very convenient and efficient move.

Is Quito safe for wandering around?

Not really.  We were warmed by the hotel host as soon as we arrived.  They told us not to walk outside the historic center.  Also we did look quite foreign in the city, so we would be an easier target.  So the double-deck bus was a good choice for us to travel the city and the stops were in considerably safer areas.

Our first objective after we arrived in Quito from Puyo was to stroll inside the historical center hunting for some Ecuadorian made chocolates as souvenir gifts to bring back, it was a really busy city!

A little wiki about Quito

Saint Francis of Quito is the capital of Ecuador and at an elevation of 2,850 m (9,350 ft) above sea level.  Locals like to refer to Quito as “La mitad del mundo” (meaning the middle of the world).  It is the second highest capital city in the world and the closest to the equator.  It is located on the eastern slopes of Pichincha, an active stratovolcano in the Andes.

The historic center of Quito is one of the largest, least-altered and best-preserved in the Americas.  Quito and Kraków, Poland, were the first World Cultural Heritage Sites declared by UNESCO in 1978.

The central square of Quito is only about 25 kilometers (16 mi) south of the equator; the city itself extends to within about 1 kilometer (0.62 mi) of zero latitude.  To avoid confusion, the word Ecuador is Spanish for equator.

What to expect for the Cotopaxi Volcano day tour?

Your best bet is to pre book and pay for the tour online, as you wouldn’t want to have to look for local tour operators inside the center.  There weren’t many choices and their offices were really hidden.

We had our tour booked online and we received an email confirmation with details of the meeting point, which was by the main square, about only a 5 minutes walk from our hotel.

The tour was big, I guess there were over 30 people on the tour bus.  The tour guide spoke both in English and Spanish.

A little wiki about Cotopaxi Volcano

Cotopaxi has erupted more than 50 times since 1738, resulting in the creation of numerous valleys formed by mudflows around the volcano. The last eruption lasted from August 2015 to January 2016.  Cotopaxi was closed by the authorities for climbing until October 2017.

The traffic between Quito city to Cotopaxi park can vary so much, usually just over 1 hour if traffic is good.  The tour included breakfast and lunch in the same restaurant.  I was pretty disappointed with the menu.  Usually this type of organised tour would offer something local to the tourists, not always the best but good enough for us to learn the local cuisine.  The menu was scrambled eggs for breakfast and spaghetti bolognese for lunch… What a missed opportunity!

As we were approaching the entrance of the Cotopaxi National Park, we picked up a couple of more ladies, the tour guide introduced them as the mountain goats.  They would walk with us up to the summit.

The Summit Walk, tough walk uphill and vertical downhill on the volcanic ashes

We hopped off the bus at 4,000 meters above sea level, our walk uphill was tough.  Due to the altitude, our moving pace was really slow.  Our destination was the Refugio José Rivas, 4,864 meters above sea level.  This reminded me of the walk in snow capped summit at Chacaltaya mountain, Bolivia, at 5,300 meters above sea level.  We only needed to walk up 300 meter so it wasn’t as noticeable in terms of breathing difficulty while walking. Read more on my old trip to Bolivia post (in Spanish): El viaje a Sudamérica – Parte Dos – Bolivia.

Don’t forget to get a stamp on your passport

For everyone who reached the peak they can get a stamp at the refuge camp, which was pretty cool.  Inside the refuge, there is a little cafe where you can enjoy some hot beverages and snacks to re-energise yourself and get ready for downhill.

Downhill wasn’t easy either, it’s less tiring but you need to move very cautiously, it was almost vertical with nothing to hold on to.  It felt like you could fall over, after a while I found that sliding down using my heels and putting all my weight to lean backward helped me move faster, less nervous of the height.

Watch out for those wild foxes

According to the tour guide these wild foxes were supposed to be in the woods on the lower level of the naotional park.  Recent years they got smarter as they can be fed so easily by the tourists and they are no longer afraid of humans.

Our flight was in the evening so we had most of the day free to spend.  We hopped on the open top double-deck bus to go around the city.  We made a couple of stops to visit the Mercado Artesanal La Mariscal (a souvenir market) and the Virgin of El Panecillo (hill top to oversee the whole of quito from all angles).