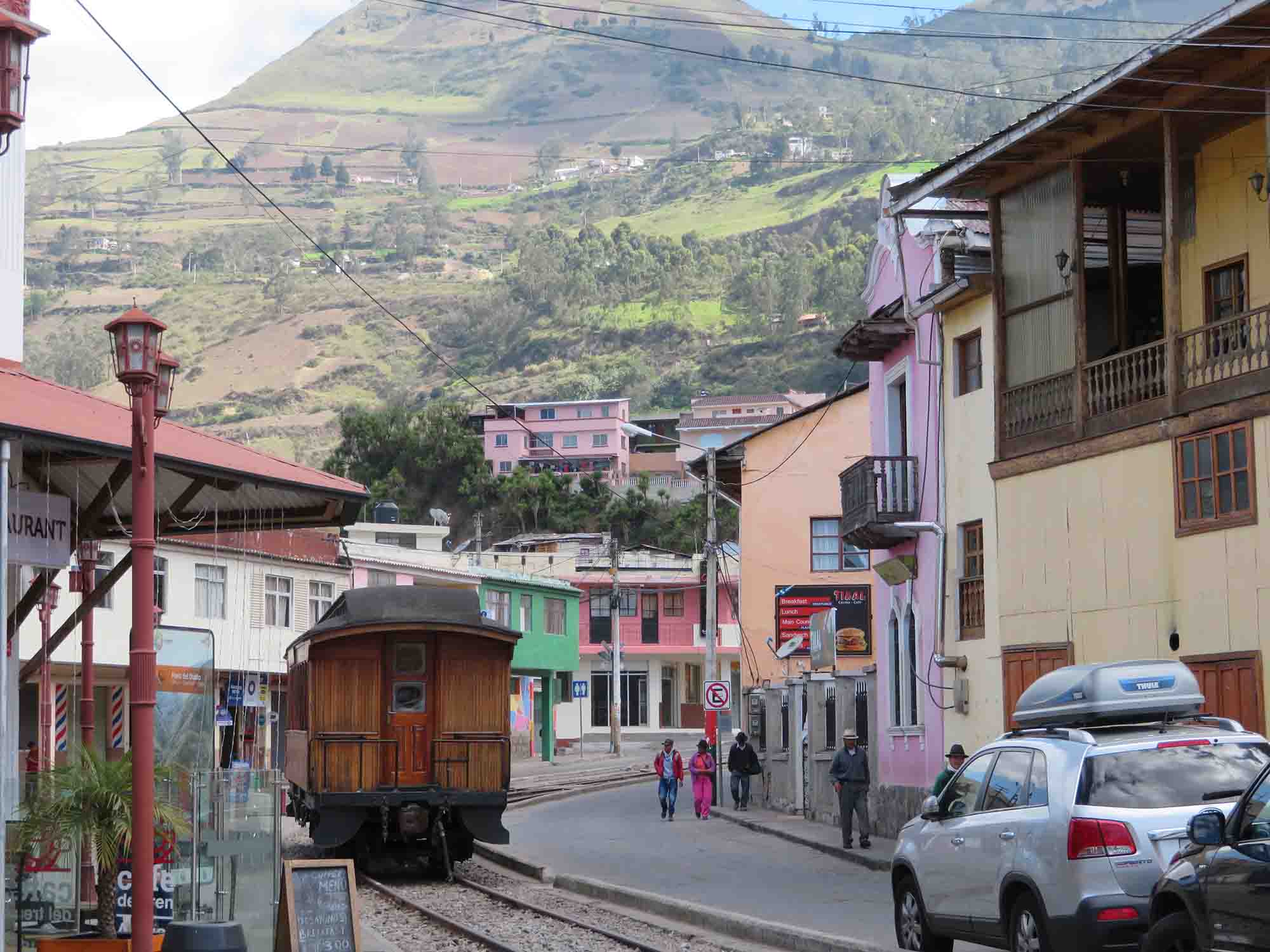 Alausí, boarding on the Devil’s Nose train through the Andes

We broke our bus journey between Cuenca and Baños in half, taking a 2-nights stopover in Alausí.  A historic town perched on the side of a valley more than 2,000 metres above sea level.  One major reason I wanted to visit Alausí was to experience the Devil’s Nose train through the Andes.

The Devil’s Nose Route (also known as Nariz del Diablo), is the most impressive section of Ecuador’s railway.  It follows a zigzag line up and down on the rocky slopes of the Andes, descending 1,000 meters in 12 km.  Slowly moving forwards and backwards until it reaches the bottom.

How to get to the Devil’s Nose Train in Alausí from Cuenca?

As part of the tour to Ingapirca, we stopped at Cañar which was on the way north.  Not too much diversion.  From Cañar, there were plenty of buses going towards Baños or Quito,  which Alausí is on the way to.   We hopped on the bus to Quito, and it took approximately 3.5 hours to Alausí.

If you hopped on the bus for the destination that isn’t the final one, you need to make sure you don’t miss it.  The bus conductor or assistant won’t remember to tap your shoulder, instead they shout out the stop name. The bus would just stop briefly to offload passengers.  Due to the conductor’s strong accent, we unfortunately didn’t catch the word properly and missed our stop.  Luckily we realised it not too far after we missed the stop as I was constantly checking on the GPS on google map.  The bus took a short break at the Alausí service station, where we asked the shop assistant to call for a taxi to take us back to Alausí town center.

Where to stay in Alausí?

The town is really small, you can traverse it end to end in 30 minutes, so location doesn’t really matter.

We arrived in Alausí on Sunday evening without realising the train doesn’t operate on Monday after checked in Community Hostel Alausí.  Therefore we had to extend our stay for the 2nd night in Alausí. Due to the hostel availability, we had to change our stay to El Balcón del Tren Guest House for the second night.

The secret hiking route along side of Devil’s Nose train route, more time to admire the scenic valleys through the Andes

On Monday, the owner of Community Hostel Alausí guided us to a secret hiking route along a similar path to the train.  The tail takes 4 hours there and back.

It’s great to be able to discover somewhere that’s very little known, however, the trail is right on a precipitous cliff which can be a bit dangerous on some of the narrower paths.   The trail is not part of any of the official hiking trails, it’s only the locals who see to know how to get to this secret path.  The scenery was amazing and breathtaking, overall it was sort of an adventure for us.

We went at our own pace and enjoyed the hike.  Without the train in operation, there were a lot less tourists around, the whole town was rather peaceful and quiet.

This section of the railroad was built by 4,000 Jamaicans and other workers.  More than half of them died while building this Devil’s Nose Train segment of the railroad due to the dangers of precipitous cliffs, illnesses, and diseases.

The train takes its name from the towering rock face of Cóndor Puñuna (Condor Mountain) which presented a seemingly impassable obstacle during the construction of Ecuador’s first railway line at the beginning of the 19th century.  In 1998 this historical line was almost closed.  Until more recently Ecuador’s president, Rafael Correa allocated a budget of $245million for the reconstruction and modernisation of the railway’s infrastructure and rolling stock. In 2013, the entire Guayquil to Quito Railway was officially reopened.

As a consequence of this investment, the old trains that used to ascend and descend the Devil’s Nose have been replaced with modern tourist trains.

What to expect for taking the Devil’s Nose train journey?

The station is right in the center of the town in Alausí, there is a nice cafe onsite both in Alausí and Sibambe station.  We took the 11am train on Tuesday morning.  Prior to the train departure we had a bit of time to chill in town, browsing some souvenir shops and enjoyed a nice cup of coffee at the station cafe.

The train left on time, rolling green hills and mountain peaks dominate the landscape on all sides.  We had a 20 minutes break at the bottom of the Devil’s Nose rock.

Upon arrival at the small village of Sibambe.  There was a traditional dance as a gesture of welcoming us to their village.  We disembarked in the village and we had 1 hour to explore the area where you would find a local museum, a gift shop and a cafe.

Continuation of our bus journey to our next destination in Baños

The Devil’s Nose train brought us back to Alausí town center at 1.30pm.  We had a nice lunch in one of the restaurants near the station.  After lunch we went back to El Balcón del Tren Guest House to collect our luggage and we managed to catch our onward bus departing at 3pm for Riobamba, from there we changed to another bus to Baños.

How to get Alausí to Baños by bus?

Alausí bus for either Riobamba or Ambato departs every 30 minutes (3 hours), then connecting to the bus for Baños (1 hour).  There were plenty and regular buses during the day so no stress for us.

In Riobamba bus terminal, if the weather permits you could even see the Chimborazo snow capped summit.