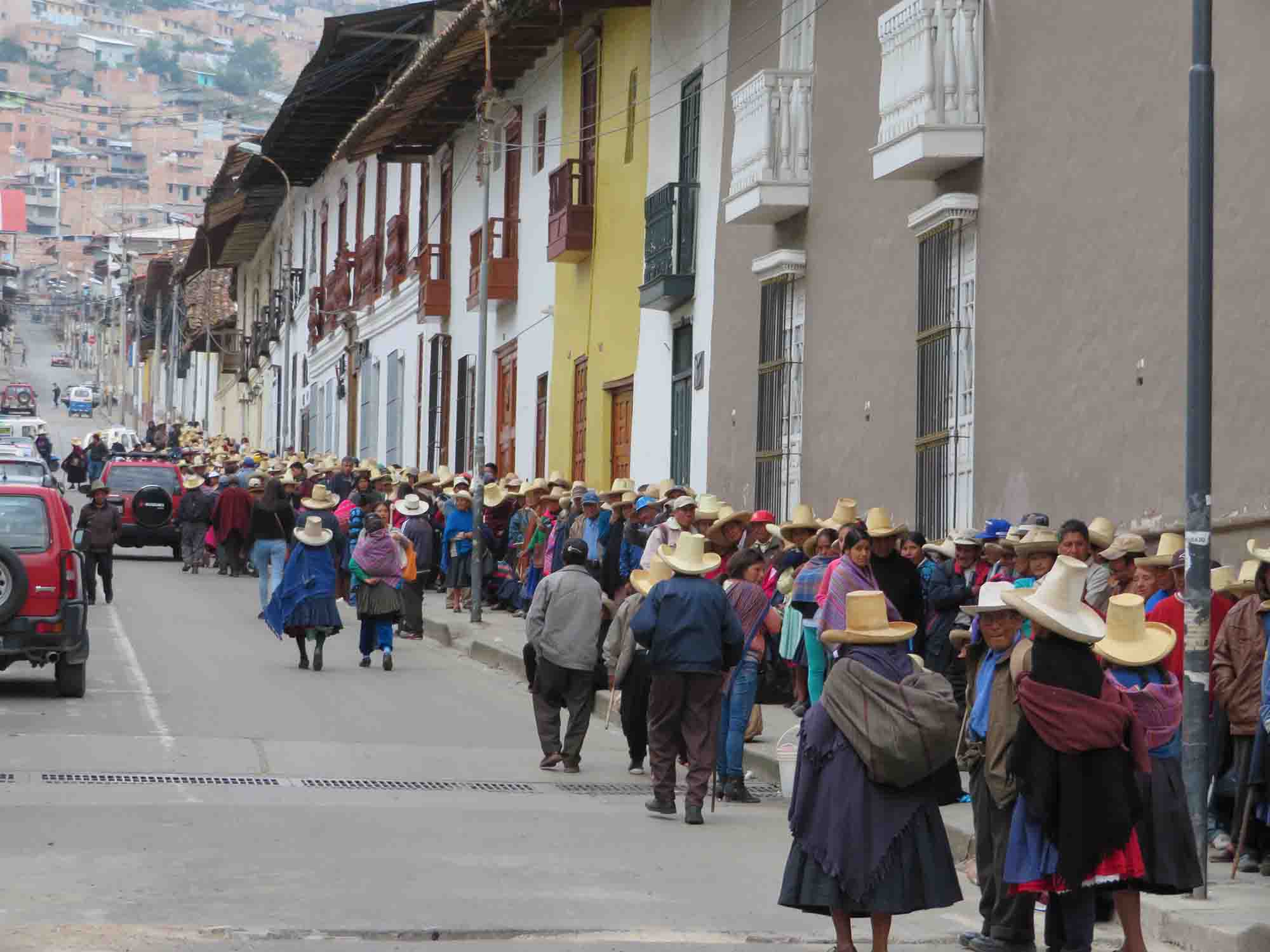 Pack Cajamarca in One day

31 hours after the departure from London including an overnight airport stay in Lima. We took the first morning flight from Lima and touched down at Cajamarca airport around 7am on a Sunday morning.  We had only one day, read on how to pack Cajamarca into just One day?

Our lodging place Casa Bonita is approximately 4km away from the airport. As soon as you left the terminal, there are plenty of taxi drivers looking for business. There were very few official taxis waiting around but the drivers are the same, you will have to negotiate with them. Just watch out, every driver would tell you it’s very far to get to your destination where it’s only a few kilometers away. Cajamarca is indeed a very small city. We agreed the price of 5 soles to get us to Casa Bonita which is located near the central square.

After refreshing at the hotel, we headed out to an empty city. It’s quite nice to see such a contrast between peak and off peak times in the center. Most retailers were still closed.

A little wiki about Cajamarca

Cajamarca is an important cultural and commercial center in the northern Andes in Peru, approximately 2,750 m (8,900 ft) above sea level in the valley of the Mashcon river.

Cajamarca has a mild highland climate, and the area has a very fertile soil. The city is well known for its dairy products and mining activity in the surroundings.

Cajamarca has numerous examples of Spanish colonial religious architecture, beautiful landscapes, pre-Hispanic archeological sites and hot springs at the nearby town of Baños del Inca (Baths of the Inca). The Battle of Cajamarca highlighted the history of this city, in which the Spanish invaders defeated the Inca Empire,  the Incan emperor Atahualpa was captured and murdered here.

What to do in Cajamarca if you have limited time?

You can chillax in the city, just walk around the centre. Even though it’s been recognised as a commercial center, the vibe is still quite different to Southern Peru. I would say my entire journey in Northern Peru was very authentic. You won’t expect to see any foreign commercial businesses here, so no Starbucks-like cafes.

Joining the two half-day tours in one day

There are two popular half day tours which you can book through any tour operators.

Great arrangement for us as we could easily pack two activities in one day. Two sights were in the opposite direction so you won’t waste time on the road. You would have to return to the center to join another half day tour.

Cumbemayo or Cumbe Mayo is an archaeological site located 20 kilometers southwest of Cajamarca at 3,500 meters of elevation, built around 1500 BC, it comprises aqueducts, a grotto and petroglyphs; all within an area of rock formations.

The tour will first stop at the viewing point on the way to Cumbe Mayo, where you can appreciate the entire city of Cajamarca.

You would follow the walking path around Cumbe Mayo, the loop takes around 1 – 1.5 hours with a few breaks while the guide would explain its history and information.

What to expect for Las Ventanillas del Otuzco tour?

We arrived back to the main square in Cajamarca at around 2pm from Cumbe Mayo tour. It started to rain. We had a quick bite in a local cafe then hopped on the afternoon tour to Las Ventanillas del Otuzco. The whole tour makes 4 stops:

I wasn’t so borthered with the local attractions so I don’t recall its name nor the location. They are on the way to the Ventanillas de Otuzco. I was pretty surprised to see Ventanillas de Otuzco site, as from the picture I would imagine something quite massive and impressive. In reality, those little windows were tiny, which made me wonder how small the mummy was to be able to fit inside the window. Not long until I saw how people were mummified in a museum in Leimbamba the next day.

Should I spend a day soaking in Baños del Inca?

No. Baños del Inca was in my initial plan, as I wanted to relax for the day after arriving at Cajamarca. I did some research on this place. I must admit I was put off from having a hot spring that was commercially setup in Latin America after I tried Termas de San Luis in Pucón, Chile.

If you do wish to do this, try it in the early morning before all the local tour groups arrive. My favorite hot spring I had in the entire Latin America was the 3 day tour into Salar de Uyuni, Bolivia. Although you might end up with many other travellers, it was a natural pool with open mountain views and wild llamas. The experience was far better than a commercially setup hot spring in Latin America.

Don’t be shy with your Spanish, learn it on the go …

If you are still learning Spanish, this is a great place to test it out as amongst most people, even from the tour agents, hotels or restaurants, you rarely find anyone who speaks English. Well, it was a great experience for me.

We changed our plan literally in the morning, we were given vague instructions on how to use the local commute collectivos and buses to hop the towns we intended to visit. As we sat in the taxi to the collecting spot, our taxi driver responded and arranged for someone to drive us to Chachapoyas. Phew, we got there eventually without any hassles. It was a rather enjoyable road trip experience.