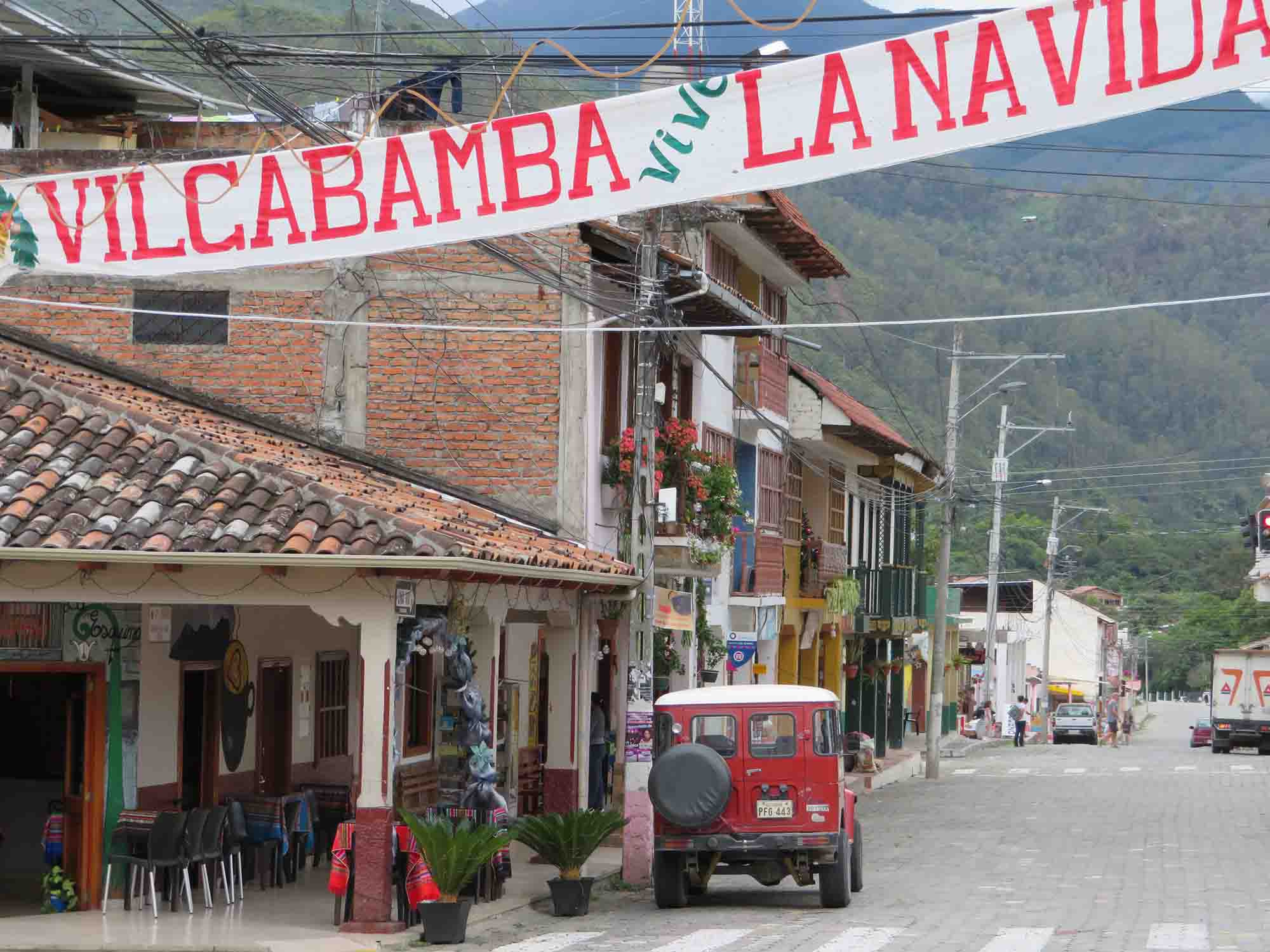 Chill in A Small Village Vilcabamba, A Bus Journey From Chachapoyas to Cuenca

The bus journey between Chachapoyas and Cuenca was absolutely dreadful.  Normally those long journey buses are pretty good and enjoyable in Latin America.  Don’t expect the same experience when taking the Nambija bus for this route.  I was pretty glad we made a overnight stopover in a small village called Vilcabamba, it’s a cute place and we chilled a bit before the continuation of the dreadful bus journey.

Chachapoyas to Cuenca by bus

The estimation of the travel time of 4 hours from Chachapoyas to Jaén was pretty accurate.  The collectivo we had was half full which was lucky for us.  There wouldn’t be much time for you to explore Jaén.  We went straight to the Nambija bus terminal just so we could pay for the ticket and not get stressed about booking a seat.

The bus terminal looked very industrial and functional in my opinion.  When we arrived we made straight for the office to sort out the ticket and checked in.  We had approximately 40 minutes left before the departure, but there wasn’t much around in the area.  We walked a couple of minutes and sat in a little cafe that was part of a garage.  To avoid needing the loo for the bus journey, I stopped drinking any liquids 4 hours prior the departure.

Crossing the border from Peru to Ecuador

La Balza is the border point between Peru and Ecuador.  As usual at the land border crossing, we first got an exit stamp from Peru and then an entry stamp from Ecuador.

Something I don’t really understand …

The immigration officer on the Ecuador side required a photo taken with the visitor.  The officer didn’t explain anything, just grabbed us and took a picture with us individually.  I am still not sure how this border crossing integrates with the general registration of entry of the country.  We didn’t know this until we were leaving the country.  Although nothing to worry about, we were just held up by the exit border control at the Quito airport for a while.  As far as I was aware, they just couldn’t find the details of our entry because the border guard didn’t register entry properly.

There is a little grocery store just outside of the immagration control at La Balsa on the Ecuador side, where you can exchange your Peruvian Soles for Ecuadorian Dollars.  There was a very old lady sitting inside the dark grocery store, where she carefully rolled out all Ecuadorian Dollars in small notes neatly.  The condition of the cash looked pretty dodgy but it’s ok.

Road after La Balza and Zumba is unpaved, and it was very windy.  Roughly around 8pm we arrived at Zumba, outside a very tiny local restaurant.  They charged a flat fee of $5 per person if you were going to eat.  The meal was either pork or chicken and a glass of freshly squeezed juice, I don’t know if there was a vegetarian option.  It didn’t look great but it tasted good.  We had the choice of pork and it was served with potato like root vegetable and a glass of fresh apple juice.

A little wiki about Vilcabamba

Vilcabamba is a village in the southern region of Ecuador, in Loja Province, about 45 km (28 miles) from Loja.  The area has been referred to as the “Playground of the Inca”, which refers to its historic use as a retreat for Incan royalty.  The valley is overlooked by Mandango mountain, protecting the area from earthquakes and other natural disasters.

Vilcabamba village, end to end, takes less than 5 minutes to walk.  There seemed to be many expats who chose to retire in this village.  There were many local shops, and surprisingly, you will also see some souvenier stores offering handcrafted jewelry with gemstones sourced locally.

Nothing much to do apart from chilling in the village

We arrived just past midnight with the Nambija bus.  Our hostel is very centrally located, about a 2 minutes walk from the bus drop off point.  We checked into Hostal Eterna Juventud late evening and relaxed until midday in this cute village until we catched our onward journey to Cuenca.

Vilcabamba to Cuenca by bus

You first need to take a local commuter bus from Vilcabamba to Loja (1 hour), then go from Loja to Cuenca (4 hours).

The local commuter bus from Vilcabamba village for Loja was pretty straight forward. The terminal is right around the corner from the town center and you won’t miss it. It departs every 30 mins. Once you arrive in Loja terminals, you will just need to find the windows that sell tickets to Cuenca. There were plenty of companies operating this route passing Cuenca which you can also hop on.

I still don’t know exactly why and what these clocks are for, but we saw everywhere in Ecuador.  When the bus drove past some stops, I saw the bus assistant had to jump off the bus and run to the clock, insert a piece of paper, then run back to the bus while the bus was still on the go very slowly.  I am assuming that this is a way of tracking whether the bus is on schedule or not.  Surely this can be satellite tracked?

2 thoughts on “Chill in A Small Village Vilcabamba, A Bus Journey From Chachapoyas to Cuenca”